I recently upgrade my network stack to a Ubiquiti UniFi-based setup. Overall, it's been an awesome upgrade and I've really enjoyed working with the hardware. However, I was getting bit by a pretty serious bug when it came to my primary desktop machine - a 2018 Mac Mini.

My current network rack setup is as follows (I'll get these on my gear page sometime soon):

Currently, everything is connected to the 24-port switch, generally with power coming from the PoE-functionality it offers. The network was simple at the time, with just the primary LAN and two WLANs (one for regular use, the other for IoT devices), and relatively standard-out-of-the-box configuration.

I was assigning static IP addresses for some of the primary devices on the network, such as my NAS and primary workstations. Everything was working beautifully, with one huge exception: my Mac Mini was constantly losing internet access.

When working with the Mac Mini, I was able to assign a static IP, access all network resources, and for a short period of time I was able to access the internet (I would run speed tests and browse via Safari). However, after a few minutes, I would lose connectivity to the internet, but not the network. A speed test would not run, and browsing the internet only worked for domains I had previously visited.

Knowing that final point, I assumed there was an issue with DNS. If I used another browser, such as Chrome, that didn't use some of the baked-in macOS functionality, the internet would mostly work, albeit very slowly.

I started all possible debugging steps I could think of:

During this debug process, there were moments where the internet connectivity seemed to come back. For example, when I switched static IP address assignment off and renewed my IP address via DHCP, I would get access again for a few minutes. From there, I tested manually changing my address to a different IP address, with each time giving me access for a brief window yet again.

As my last step, when I decided to reset the UDM-Pro back to factory, I went through every possible internet-bound setting with a fine-toothed comb, turn it on and off to see when my connectivity would come back. And finally, I found the culprit.

Universal Plug and Play (UPnP) is a set of networking protocols that permits networked devices, such as personal computers, printers, Internet gateways, Wi-Fi access points and mobile devices to seamlessly discover each other's presence on the network and establish functional network services for data sharing, communications, and entertainment. UPnP is intended primarily for residential networks without enterprise-class devices.

In the new UniFi settings pages, you can configure this via this page: 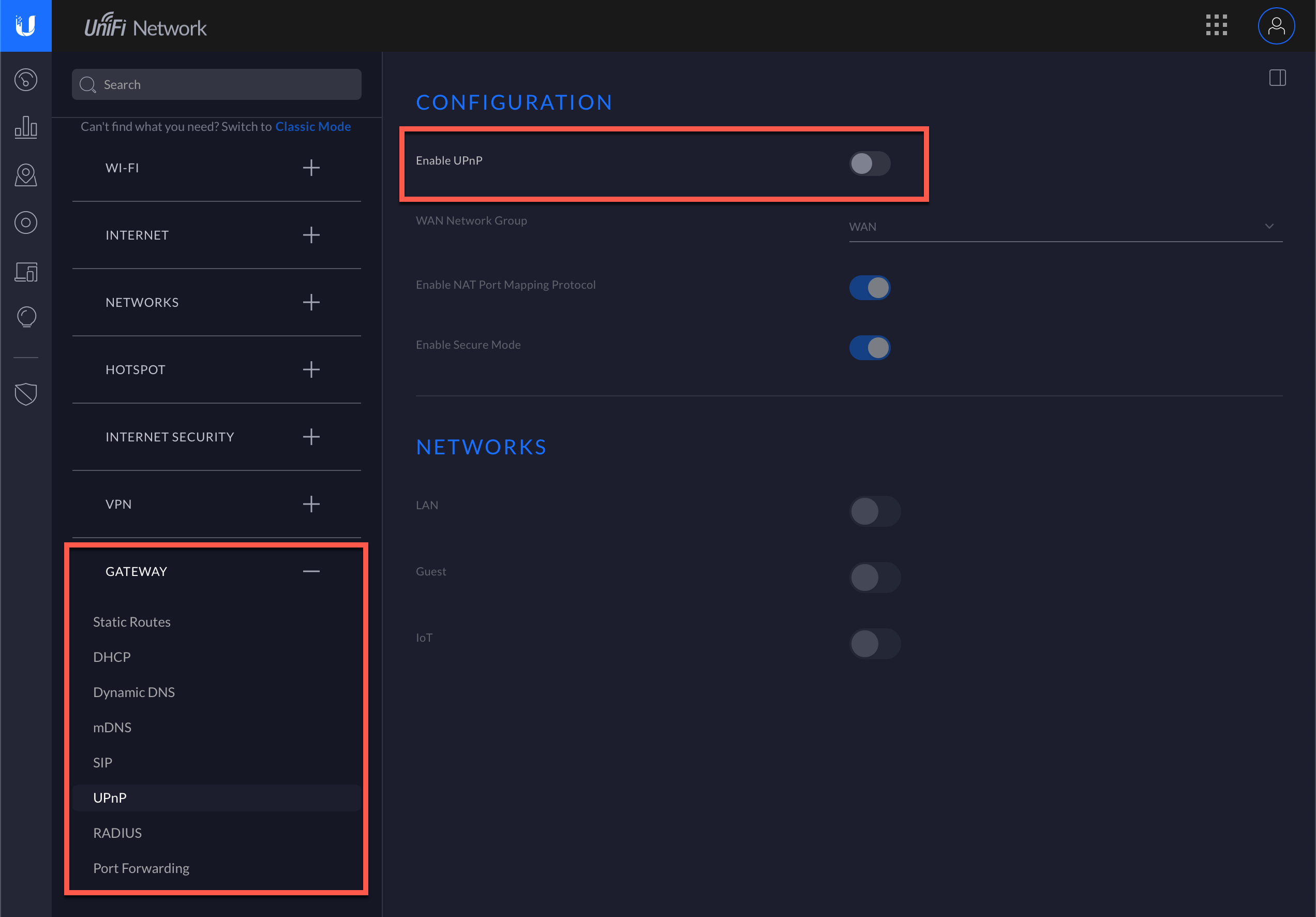 However, some security researches consider UPnP to be a security risk, as it allows applications and services to open and close external ports on your gateway. While this can be a very useful feature, especially for those of us using Game Consoles where a large number of ports may be required to allow access to online game networks, it does give a pause for concern.

Generally, I'm ok with leaving this setting on since I have a "small" network that I manage well. It never crossed my mind that this could be the issue in my Mac Mini woes. Once I disabled this setting in UniFi, everything worked beautifully. I was able to set my static IP address, have both my ethernet and WiFi adapters enabled, and use all internet services.

While this does fix my issue, it does give me some concern at the same time. That means there are services on my Mac Mini asking for UPnP configuration changes (probably excessively). I still need to find what those services are; they would most likely be third-party as my MacBook Pro had no issues and that's a relatively stock installation of macOS.

I wish I would have thought to disable UPnP earlier on in the process. I spent probably twenty or more hours debugging this issue, just to find it was a single checkbox. Hopefully if you run into this issue, you found this post quickly. There was one post in the Ubiquiti Community (Apple Mac Woes via Ethernet and WiFi) that looked very close to my problem, but that was a couple years old with no answer – hopefully they found a similar solution.